Our fairy dresses have started arriving which means that fairy shoots are just around the corner!

The shoots will last roughly 25 minutes during which time your little girl will be transformed into a beautiful fairy with a fairy dress, wings and a wand.

Full details have yet to be finalised but the shoots will come as part of a package. For example, package A will include the photo shoot and a 9x6 print for £40. Other packages will include various other products and we have some seriously beautiful products which will be available, most of which will have a fairy theme.

We anticipate that these shoots are going to be very popular (we've already received a lot of enquiries) so early booking is going to be essential.

We're also looking to extend the shoot into a party format for up to 6 children. Upon arrival, each child will be given a fairy dress, wings and a wand then they'll head into the salon which adjoins our studio. Here their hair will be curled or pinned up before being finished off with some glitter spray (all fairies have to sparkle).
Then it's back to the studio for a mini photo shoot with each child having an individual photo before finishing off with a group shot.

Price will be £30 per child and each child will receive a 6x4 print of the group shot as a special reminder of their fairy experience. 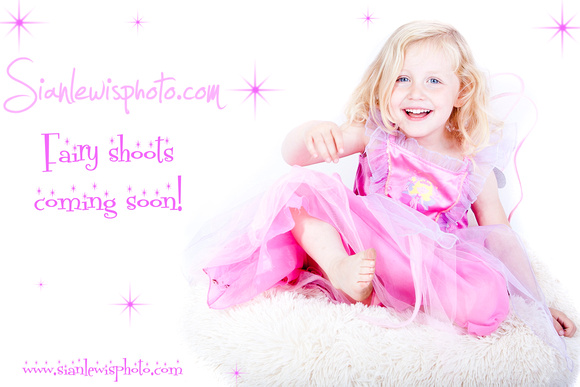