It's been all go at Sian Lewis Photography for the last 6 weeks and so my blog has been a little neglected and I have a few posts to catch up on.

We're starting with Rhian and Jarred's wedding at the beautiful Canada Lodge. It was my first time at this venue and I totally fell in love with it. In fact, I'd go as far to say that Canada Lodge is now one of my favourite wedding venues.

I arrived at Rhian's parents house in the morning to photograph the bridal prep. Like many girls, I have a real thing for shoes and an undying love for 'Sex and the City' so when Rhian handed me her Jimmy Choos, I was in my element. I could easily devote an entire album page to those shoes!

Bridal prep always seems to go so quickly, in what seemed like no time at all, Rhian was in her beautiful dress and walking down the stairs to be met by her dad who looked like he might just burst with pride. 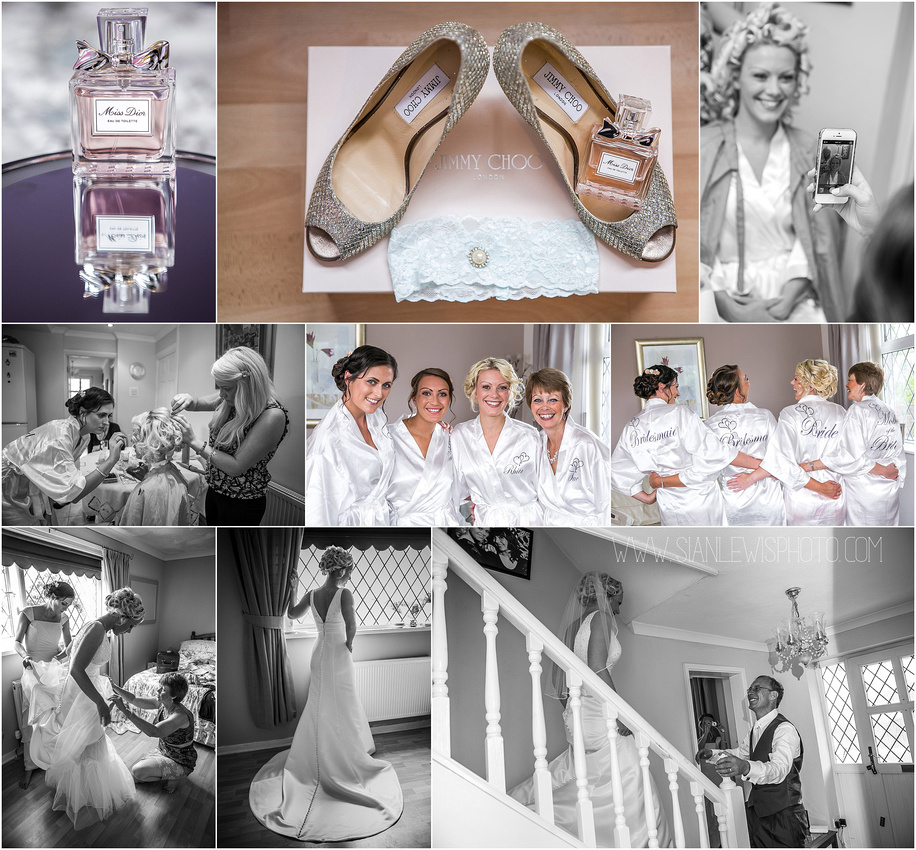 Once I'd finished with the girls, it was a short drive over to Canada Lodge to photograph Jarred and the boys. Thankfully, at this point in the day, the rain clouds which had been hanging around during the morning decided to go elsewhere and were replaced with big, beautifully fluffy white clouds which gave me the most amazing lighting and backdrop for the groom and groomsmen photos.

After a few photos outside, it was time to get the ceremony started. Jarred looked remarkably calm as we waited for Rhian to make her entrance and once again, her dad looked as if he might burst with pride. 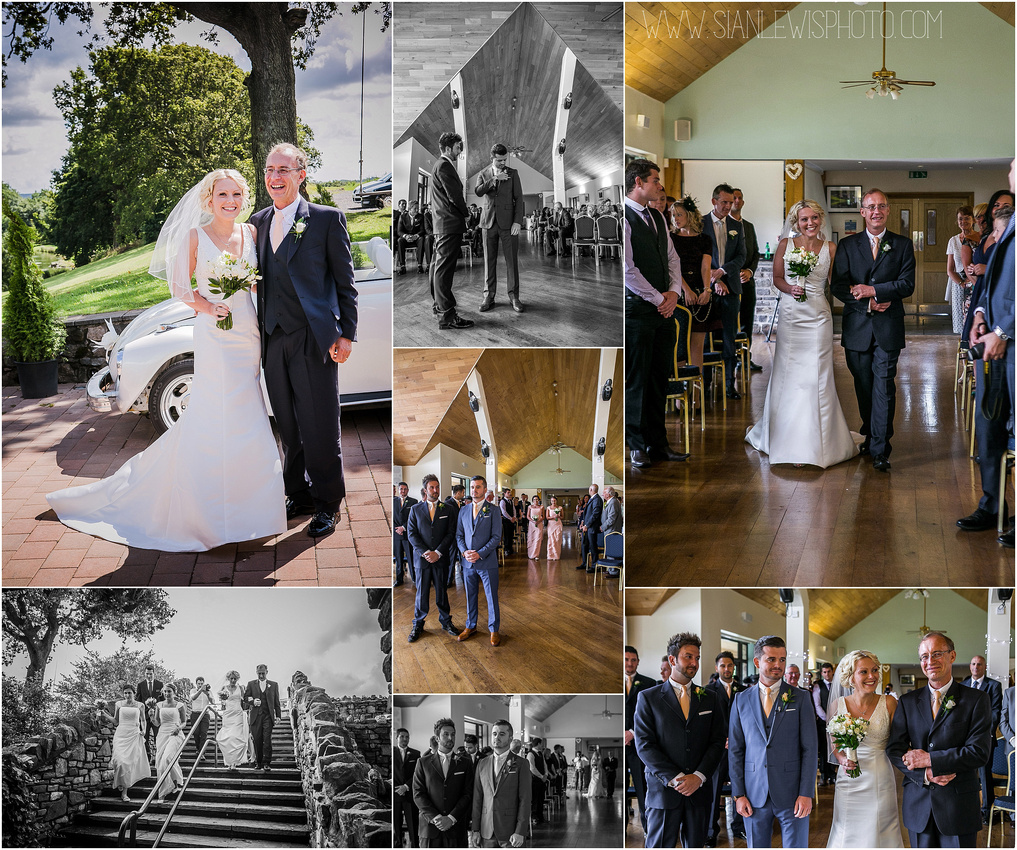 The light in the ceremony room at Canada Lodge is just wonderful thanks to the floor to ceiling windows which let in so much ambient light. It really does make photographing there an absolute joy and is another reason why Canada Lodge has become one my favourite venues. 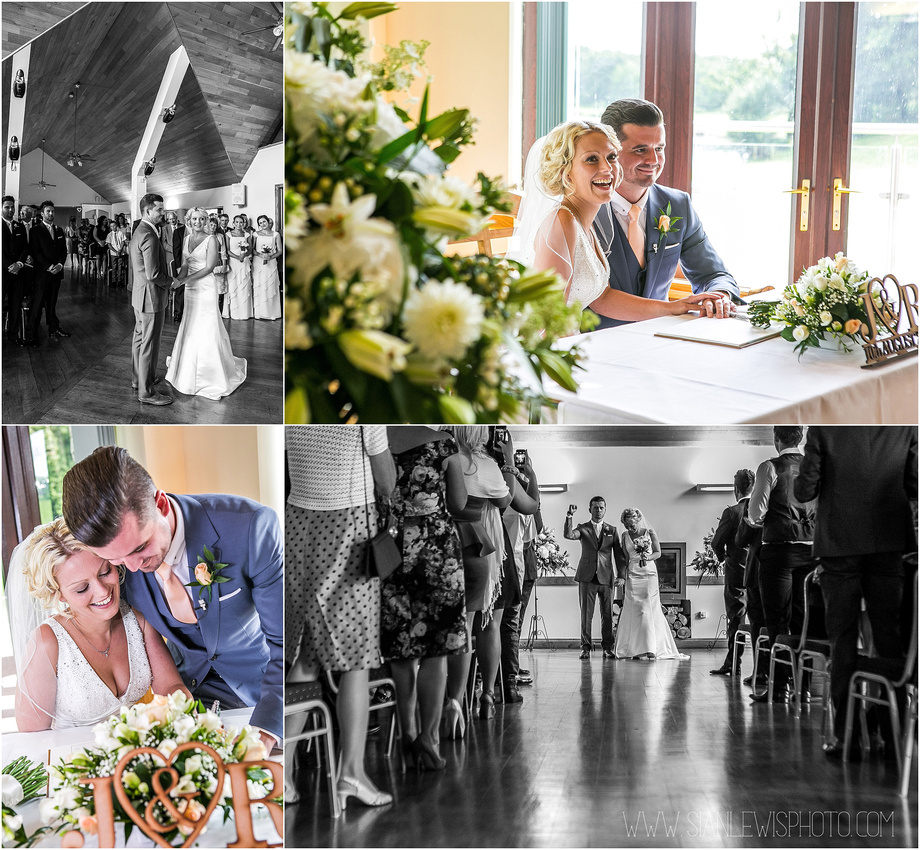 Straight after the ceremony, Rhian and Jarred hopped into the VW's for a few photos before we started the group shots. At this point, I have to thank Paul from LoveDub Weddings for helping me balance on the front bumper of the Beetle for some high perspective shots. 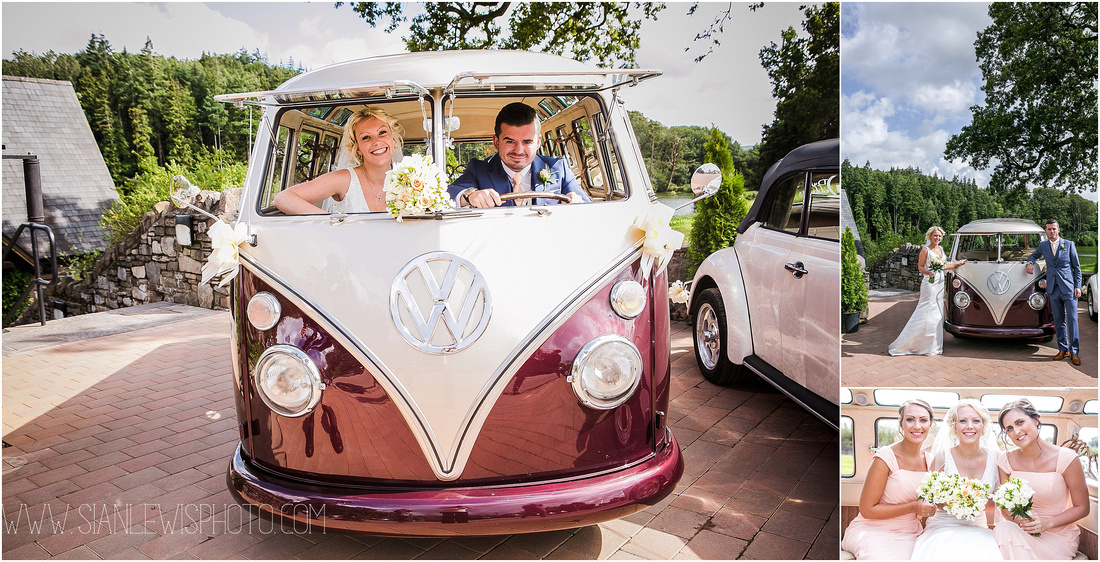 If I get the opportunity to shoot down on guests for the group shots then I normally take it but Canada Lodge is too pretty not to use as backdrop. With everyone stood on the balcony and the beautiful fluffy clouds and pine trees behind, it really did make a spectacular shot.

After the formal group shots it was time to have a little fun with the bridal party photos. It's fair to say that they really entered into the spirit of things and we got really great images.

Once we'd completed all the group photos, it was time for one of my favourite parts of the day, the bride and groom portraits. Canada Lodge has no shortage of fabulous places to use and I was quite spoiled for choice but I knew we just had to use the swing for some feature shots. The cloudy sky really came into its own here! 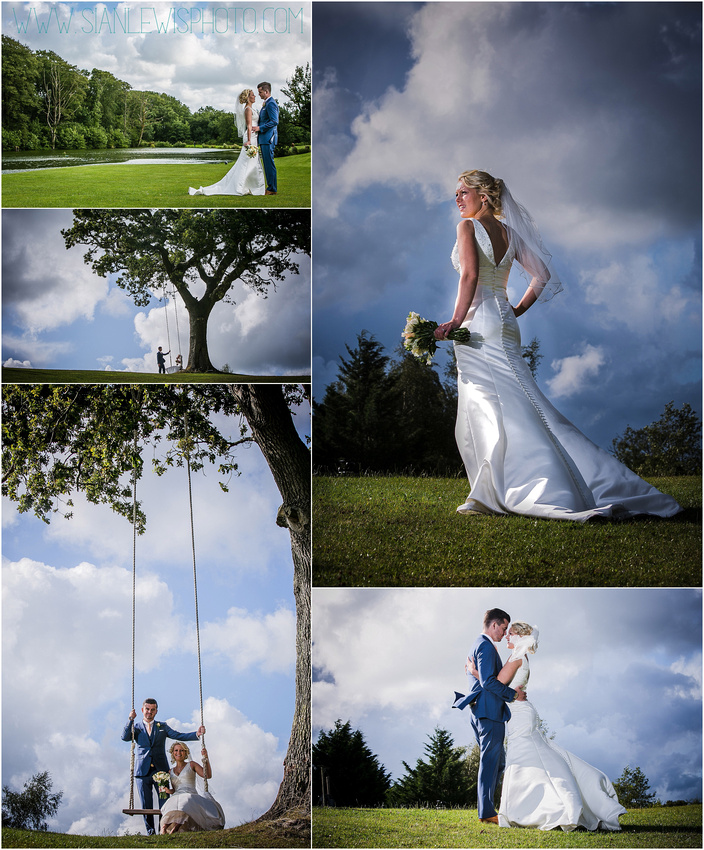 After the speeches (which I can honestly say were some of the best I've ever heard) Rhian and Jarred cut their beautiful cake which was adorned with sugar paste flowers and topped off with a miniature Eiffel Tower which completed their Parisian themed table plan and place settings.

Shortly after the cake-cutting, the evening guests stared arriving and Rhian and Jarred took to the floor for the first dance.
As the sun started to set, we nipped out onto the balcony for my signature umbrella shot and then one final image of Jarred and the groomsmen.

I loved capturing every moment of Rhian and Jarred's wedding, both they and their families and friends were so incredibly welcoming and friendly, it made the day an absolute pleasure from start to finish.
Seeing how much love and support Rhian and Jarred have from the people around them, I have no doubt that their marriage will go strength to strength and I wish them all the very best for the future.

Rhian(non-registered)
Thanks so much for all of your hard work Sian, We had an amazing day made all the better by the amazing memories that we hold due to the photos. It was an absolute pleasure to have you photograph our day and we will be eternally grateful.
Rhian and Jarred xxxx
No comments posted.
Loading...
Subscribe
RSS
Recent Posts
Craftsman qualification Choosing a newborn photographer Qualified newborn photographer Pete and Jayne at Pencoed House Karen and Ieuan Chris and Anwen got married Is your baby in safe hands? Autism Heroes Awards Lauren and Dave are having a baby. Choosing a newborn photographer
Keywords
South Wales photography wedding Vale Glamorgan of photographer newborn photographer Cardiff
Archive
January February March April May June July August September October November December
© Sian Lewis Photo. All content is protected under copyright law and may not be copied or reproduced.
User Agreement
Cancel
Continue